Kimberly Langolf, director of Risk and Sponsored Programs at the University of Wisconsin Oshkosh, is still amazed to think her ninth and 10th years on the job focused on leading response to COVID-19 testing and vaccination.

“I would say predicting a global pandemic and my role was not in my ‘crystal ball’ for my career path,” Langolf said. “However, I felt that I had a unique set of experiences and skills that I could use to make a positive impact on our community. And I never shy away from a challenge. It was an unprecedented problem that needed to be solved.” 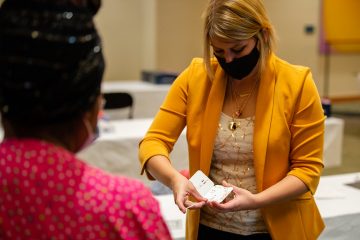 Langolf received a UW System Board of Regents 2021 Academic Staff Excellence Award on June 4. The award recognizes exceptional service to the University and is the UW System’s highest recognition bestowed on members of its academic staff.

“(Kim’s) remarkable service to the institution, the UW System, and the state of Wisconsin through the COVID-19 pandemic has been nothing short of groundbreaking,” said UW Oshkosh Provost John Koker.

The testing center Langolf oversaw achieved an average COVID-19 positivity of 2.5 percent with more than 51,000 antigen tests performed, as of late May. She served as co-investigator for multiple antigen validation studies for the Centers for Disease Control and Prevention, and she assisted in securing more than $17.5 million in COVID-19 CARES funding for UWO.

Langolf said she vividly remembers the day in March 2020 when a decision was made to move everyone off campus.

“If I’m being honest, I was terrified,” she said. “Our emergency manager and I knew that the recommendation to close campus and move our entire operations remote could be the biggest consequential decision in our University’s history.”

Langolf said she had many sleepless nights over the pandemic–concerned about people’s safety as well as the future of the UWO campuses. Planning and strategizing began immediately on how to come back.

“In 2020, the mission was ‘simple,’ get our students back in the classroom but put safety measures in place that challenge the limits of in-person learning,” she said. 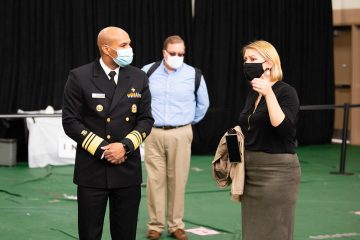 Langolf, who earned both her undergraduate and graduate degrees from UWO, in biology and microbiology, respectively, joined the staff at UW Oshkosh’s Environmental Research and Innovation Center (ERIC) in 2011. She did research on beach restoration on the Great Lakes before being promoted to ERIC lab manager.

At the ERIC she worked as a water quality scientist, lab manager and oversaw contractual and grant research in environmental quality. In 2016, she transitioned to UWO Sponsored Programs, where she served as a grant writer. Since then, she grew into the position of director for two departments, Sponsored Programs and Risk and Safety.

“When COVID-19 became a threat to our community, my role as director of risk and safety and my experience in microbiology, research and laboratory methodology gave me the skills I needed to lead us through protocol development, testing, data analysis and vaccinations,” Langolf said.

Langolf is described as the “core architect” of the University’s innovative COVID-19 testing program.

Chief of Police Kurt Leibold, who served as head of the Titans Return implementation team, said the UWO testing model was touted as the best by UW System and attracted the attention of CDC leaders who came to campus to study it. He said Langolf’s model afforded the ability to “pivot quickly based on the information presented during the ever-changing environment.”

Langolf served as one of the primary points of contact with critical stakeholders, including the CDC; the Wisconsin Department of Public Health; Winnebago County Health; Prevea-Health; and Advocate Aurora Health.

She served as the primary source for information for the CDC, which piloted its research studies on COVID-19 antigen testing through a coordinated effort with UW Oshkosh.

She was recognized by former Surgeon General Jerome Adams for the University’s proactive COVID-19 response.

Langolf was selected by the Oshkosh Northwestern as a 2020 Oshkosh Person of the Year for “outstanding impact on the community.” 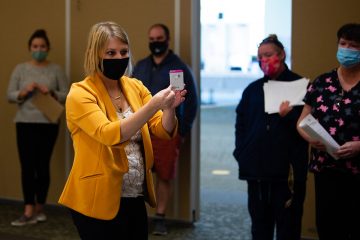 Langolf, who plans this summer to spend time on the water with her husband, children and two dogs, said the Regent’s Award is not only about her—it reflects the dedication and sacrifices of her colleagues who helped UWO emerge as a leader in managing COVID-19.

She is proud of the collaboration and relationships that were made across divisions, campuses, with community leaders and with healthcare providers. She said the number of people who contributed to COVID-19 response is “unimaginable” and was only possible due to their “insight, feedback and grit.”

University employees learned new jobs, took on extra work and were leaders in their divisions when responding to COVID-19 concerns. A variety of teams were called upon to assist with a complex problem and they provided common-sense solutions.

“I am proud to have provided some leadership to these groups and to learn from their experiences and perspectives,” Langolf said. “The relationships I have built through the past year have fundamentally changed how I see our community and for that I am grateful.”